These are the books that I have written, some with my late husband, Mark, that are currently in print.

In addition to these, I have written introductions for or contributed to, and / or designed and edited the following publications, which can be found on my other publications page. 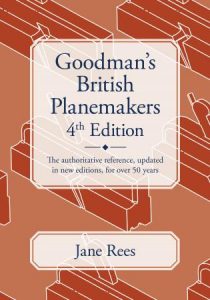 The long awaited 4th edition of British Planemakers is due for release on 1 February 2020.

Perhaps the most significant change in the 4th edition is the change of title. This book could never have been written without Bill Goodman’s inspiration, energy and enthusiasm in producing the first two editions. Without Bill’s foresight, this book would never have seen the light of day. However, this new edition only bears a passing resemblance to the first two editions and so it has been felt that the time has come, although acknowledging its most important roots, to change the title to reflect the new form.  This new name change also reflects the other major change in that there are now four confirmed planemakers who were working in the late 1600s – three in London and one in Bristol – and more may be found in due course so the description “from 1700” no longer seems appropriate, and has been omitted.

295 planemaker apprentices have been recorded, taken on by 102 masters (in the 3rd edition there were 121 apprentices under 51 masters). Some these records have shown that planemakers sometimes travelled far away from their home town to apprentice, such as Samuel Cox from Bristol who apprenticed to Williams Cogdell in London and then returned to Bristol to work, as did George Holbrook, who was apprenticed to William and  Jane Shepley in London, and then also returned to Bristol to work.

It is being published by Rowman & Littlefield, Lanham, MD USA. The estimated cost will be $59.95 / £ 39.95 and it will also be issued as an eBook shortly after publication of the hardback edition. Details can be found on the Rowman & Littlefield website at www.rowman.com/ISBN/9781931626484/Goodman’s-British-Planemakers-Fourth-Edition#

The Rule Book; Measuring for the trades

This book focuses on the measuring tools used by tradesmen and professionals in their everyday work, on the trades in which specific tools were used and how these tools were made and by whom. The intention is that the information contained here will be of use to collectors and researchers by explaining how the measuring devices were used and by placing them in a trade and social context.

It concentrates on those measuring items likely to be found and collected today Some are included because they are regularly encountered; others because they reflect important historical trends or developments. Still others pose intriguing intellectual challenges. Finally, many are simply attractive objects. Special features include illustrated appendixes, a checklist of rule makers and dealers, a full index, and separate index of names. 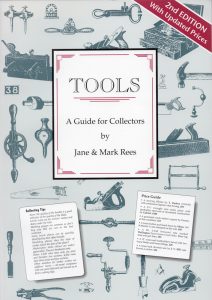 Tools, A Guide for Collectors

Descriptions, illustrations and interesting information on 80 different categories of tools. The tools are carefully described and their use discussed. 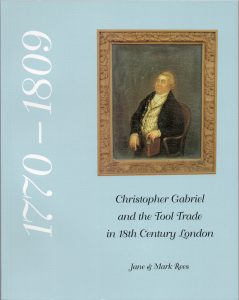 Christopher Gabriel and the Tool Trade in 18th Century London

“The book” of Christopher Gabriel, planemaker and tool seller in London from 1770 until 1809, gives a unique insight into a family business in late 18th century London. From this and other sources it has been possible to draw a picture of a small but developing business and to trace Gabriel’s connections with other toolmakers of the time, both in London and elsewhere. Perhaps the most valuable parts of the Gabriel legacy are the two inventories of his stock that have survived. These inventories, which list his stock in some detail, are reproduced in full in the book with commentary to clarify the tools and their use.